Deprecation Notice: This project and repository is now deprecated and is no longer in active development. Please use Docker Desktop instead where possible. Docker Desktop

Docker released the Docker Toolbox project to make it easier for developers who work on Mac and Windows to get started using Docker. In 2016 Docker released Docker Desktop which superseded toolbox and was significantly easier for the majority of users to get started. This still left some users behind, predominantly users who were on Windows Home editions, Windows 7, Windows 8 and users of VirtualBox. Since 2016 there have been a number of changes. Windows 7 is no longer supported and the mainstream support of Windows 8.1 has ended. The majority of Windows users are now on a version of Windows 10. Since VirtualBox 6.0 users have been able to run VirtualBox and Hyper-V at the same time on their Windows machines, allowing users to use VirtualBox and Docker Desktop side by side on Hyper-V. For Windows Home users, WSL 2 is available and Docker Desktop now uses this to provide Desktop for Windows Home

Given these changes Docker has decided to archive the Toolbox project to allow us to make it clear that we are no longer supporting or developing this product and to give us time to focus on making further improvements to Docker Desktop. Please provide any feedback via the Docker Public Roadmap 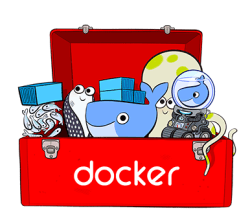 The Docker Toolbox installs everything you need to get started with Docker on Mac OS X and Windows. It includes the Docker client, Compose, Machine, Kitematic, and VirtualBox.

Documentation for Mac is available here.

Documentation for Windows is available here.

Toolbox is currently unavailable for Linux; To get started with Docker on Linux, please follow the Linux Getting Started Guide.

Then, to build the Toolbox for both platforms:

Build for a specific platform:

The resulting installers will be in the dist directory.

Do I have to install VirtualBox?

No, you can deselect VirtualBox during installation. It is bundled in case you want to have a working environment for free.