This Linux Deployment Tool, linuxdeployqt, takes an application as input and makes it self-contained by copying in the resources that the application uses (like libraries, graphics, and plugins) into a bundle. The resulting bundle can be distributed as an AppDir or as an AppImage to users, or can be put into cross-distribution packages. It can be used as part of the build process to deploy applications written in C, C++, and other compiled languages with systems like CMake, qmake, and make. When used on Qt-based applications, it can bundle a specific minimal subset of Qt required to run the application. 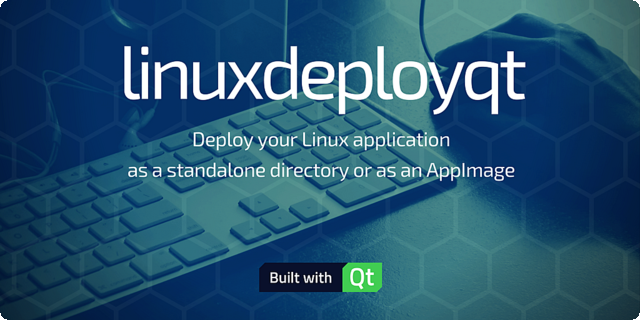 This tool is conceptually based on the Mac Deployment Tool, macdeployqt in the tools applications of the Qt Toolkit, but has been changed to a slightly different logic and other tools needed for Linux.

A note on binary compatibility

We recommend to target the oldest still-supported Ubuntu LTS release and build your applications on that. If you do this, the resulting binaries should be able to run on newer (but not older) systems (Ubuntu and other distributions).

We do not support linuxdeployqt on systems newer than the oldest Ubuntu LTS release, because we want to encourage developers to build applications in a way that makes them possible to run on all still-supported distribution releases. For an overview about the support cycles of Ubuntu LTS releases, please see https://wiki.ubuntu.com/Releases.

Please download linuxdeployqt-x86_64.AppImage from the Releases page and chmod a+x it. If you would like to build linuxdeployqt from source instead, see BUILDING.md.

You'll need to provide the basic structure of an AppDir which should look something like this:

Using the desktop file linuxdeployqt can determine the parameters of the build.

Read more about desktop files in the Desktop Entry Specification 1.0.

For a more detailed example, see "Using linuxdeployqt with Travis CI" below.

Open in Qt Creator and build your application. Run it from the command line and inspect it with ldd to make sure the correct libraries from the correct locations are getting loaded, as linuxdeployqt will use ldd internally to determine from where to copy libraries into the bundle.

If this does not show the correct path to your Qt instance that you want to be bundled, then adjust your $PATH to find the correct qmake.

Alternatively, use the -qmake command line option to point the tool directly to the qmake executable to be used.

Before running linuxdeployqt it may be wise to delete unneeded files that you do not wish to distribute from the build directory. These may be autogenerated during the build. You can delete them like so:

Alternatively, you could use $DESTDIR.

To enable icon and icon theme support you must add iconengines as an extra Qt plugin while running linuxdeployqt. In order for your application to locate the system theme icons, the libqgtk3.so platform theme must also be added:

If you want aditional plugins which the tool doesn't deploy, for a variety of reasons, you can use the -extra-plugins argument and include a list of plugins separated by a comma.
The plugins deployed are from the Qt installation pointed out by qmake -v.
You can deploy entire plugin directories, a specific directory or a mix of both.

A common use case for linuxdeployqt is to use it on Travis CI after the make command. The following example illustrates how to use linuxdeployqt with Travis CI. Create a .travis.yml file similar to this one (be sure to customize it, e.g., change APPNAME to the name of your application as it is spelled in the Name= entry of the .desktop file):

When you save your change, then Travis CI should build and upload an AppImage for you. More likely than not, some fine-tuning will still be required.

For this to work, you need to set up GITHUB_TOKEN in Travis CI; please see https://github.com/probonopd/uploadtool.

By default, qmake .pro files generated by Qt Creator unfortunately don't support make install out of the box. In this case you will get

Fix for "make: Nothing to be done for 'install'"

If qmake does not allow for make install or does not install the desktop file and icon, then you need to change your .pro file it similar to https://github.com/probonopd/FeedTheMonkey/blob/master/FeedTheMonkey.pro.

Here is another simple example.

It is common on Unix to also use the build tool to install applications and libraries; for example, by invoking make install. For this reason, qmake has the concept of an install set, an object which contains instructions about the way a part of a project is to be installed.

For projects that use CMake, autotools, or meson with ninja instead of qmake

Some applications have the bad habit of relying on CMake versions newer than what comes with the oldest still-supported distributions. In this case, install a newer CMake with

Under some circumstances it may also be required to add -DCMAKE_INSTALL_LIBDIR=/usr/lib to the cmake call.

autotools (the dinosaur that spends precious minutes "checking...") wants DESTDIR too but insists on an absolute link which we can feed it using readlink:

Caution if you encounter

Here, CONFIG+=use_qt_paths needs to be removed, otherwise it will install everything under the Qt installation paths in /opt/qt58 when using the beineri ppa.

The exception is that you are building Qt libraries that should be installed to the same location where Qt resides on your system, from where it will be picked up by linuxdeployqt.

When using Qt from distribution packages

On Ubuntu 14.04, you will need to pass in -qmake=/usr/lib/x86_64-linux-gnu/qt5/bin/qmake when using distribution packages.

A note on DESTDIR

Automating DESTDIR can be a pain, so it’s best if the program supports it to start with; my package Auto-DESTDIR can automatically support DESTDIR in some cases if the program installation does not support it to begin with.

These projects are already using Travis CI and linuxdeployqt to provide AppImages of their builds:

These projects are using GitHub Actions and linuxdeployqt to provide AppImages of their builds:

This project is already using linuxdeployqt in a custom Jenkins workflow:

This GitHub template invokes linuxdeployqt during a GitHub CI Action:

These projects are already using linuxdeployqt:

This project on GitLab uses linuxdeployqt:

This project can be bundled successfully using linuxdeployqt:

The developers are in the channel #AppImage on irc.freenode.net